The German Research Foundation (Deutsche Forschungsgemeinschaft, DFG) offers templates for research project descriptions for download in rich-text format (.RTF). I suspect that this file type was chosen for its assumed interchangeability as opposed to the proprietary Microsoft® Word .DOC format.

It turns out however that .RTF files are neither standardized nor particularly interchangeable.

The .RTF file type was invented and is continuously developed by Microsoft. It is a proprietary format, and it was never publicly standardized. On the other hand, both Microsoft’s own Office Open XML (.DOCX) as well as The Document Foundation’s OpenDocument format (.ODT) have been published as ISO standards. In addition, the default file type used by Word 2003 and later (.DOC) has been widely used for over a decade. I am probably not alone in thinking that .DOC files have become a de-facto industry standard.

The following screenshots demonstrate the differences between Microsoft Word 2010 (left) and LibreOffice Writer 4.1.3.2 (right) when the DFG project template (.RTF) is imported: 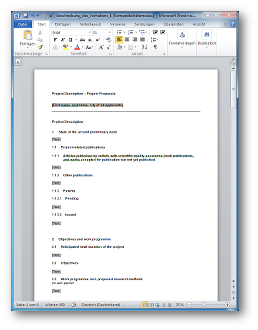 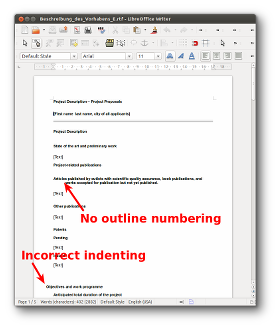 The outline numbering is lost when the file is imported into LibreOffice, and the indenting is off.

It occurs to me that by choosing .RTF as their preferred file type, the DFG inadvertently prevents interchangeability and ties users to Microsoft Word, when what they obviously (to me, at least) wanted to achieve is the exact opposite, i.e. to offer an interchangeable, open, non-Microsoft file template.

I am an ardent user of the OpenOffice/LibreOffice Writer application which I think is a better alternative to the recent editions of Microsoft’s Word, especially for writing scientific documents (Microsoft Excel however is unsurpassed, but that is a different story). Therefore I was a bit disappointed when I discovered that the .RTF project template file offered by the DFG is not imported properly into Writer, and I decided to quickly create an .OTT template file myself.

The template file that I created closely mimicks the original DFG template, including several typographic errors. It makes full and proper use of paragraph styles, which are organized in a hierarchical manner. Thus, should the need arise, one can quickly re-format the entire document.

I release this .OTT OpenDocument template file into the public domain to help anyone who is in a similar situation as I was.

Use it at your own risk!

Note: The template was updated based on the current version “06/15” on the DFG server.

As opposed to .RTF files, OpenDocument files are ISO-standardized, and they can be used with LibreOffice/OpenOffice as well as Microsoft Office. (Frankly, I don’t know how Apple’s Pages application handles either of these file types.)

So how does Microsoft Word import the .OTT template file? Well, first of all, since it is an .OTT template rather than an .ODT text document, Windows won’t recognize it for what it is. You have to either change the file extension to .ODT, or tell Windows explicitly to open the file with Word.

When importing the file, Word will complain that the .ODT/.OTT file is ‘damaged’ and contains ‘unreadable content’. How surprising that Word should not open a non-Microsoft file without much a-do! However, one can safely dismiss the error message, and then confirm to open the file by clicking ‘Yes’. 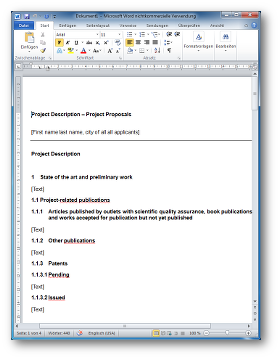 Of course, if more advanced features such as embedding graphs and pictures are needed, I would not be surprised if none of these programs are able to deal with ‘foreign’ files.

Linux and VirtualBox on a T480s with high-resolution display